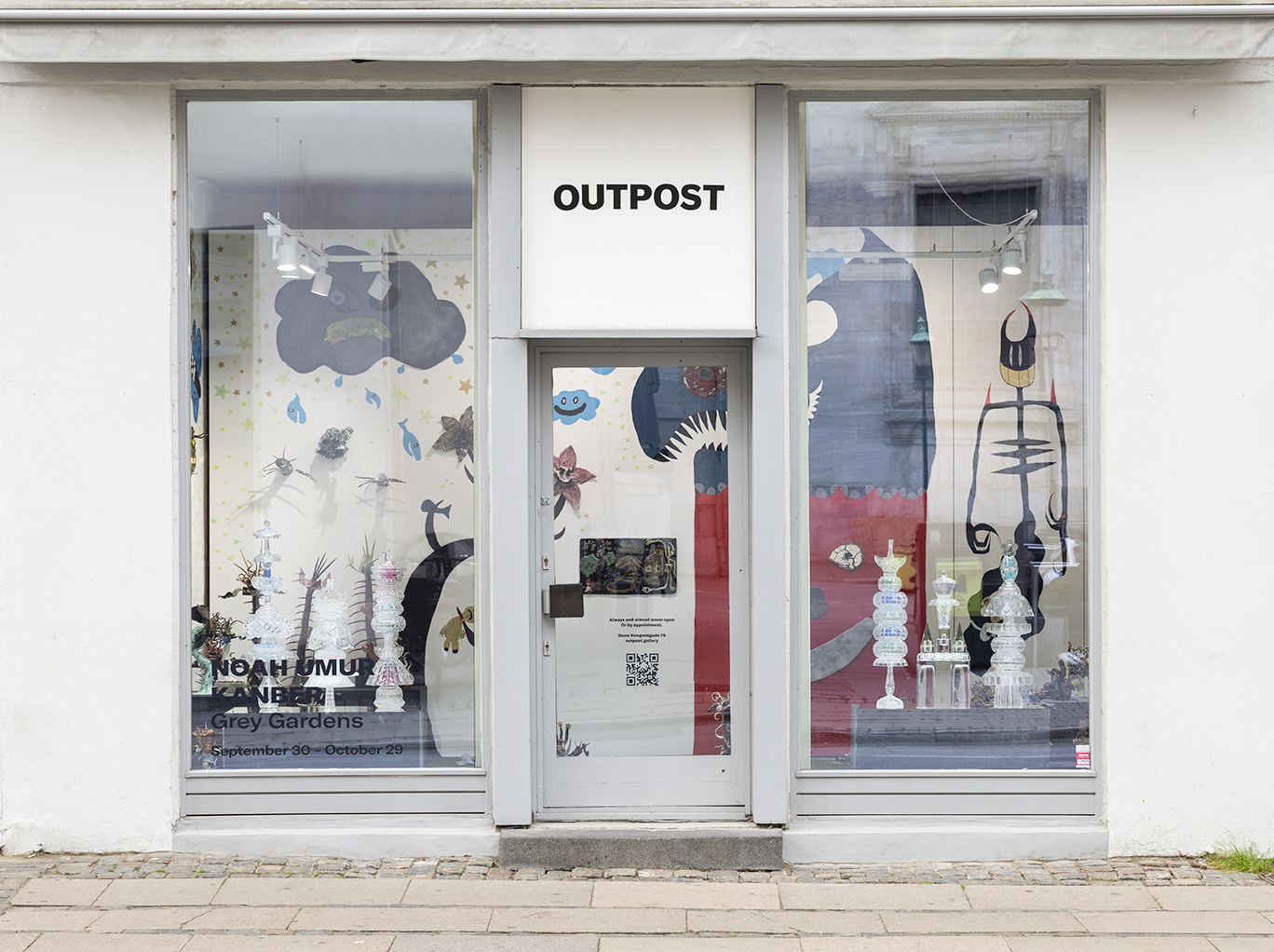 In Noah Umur Kanber’s childhood home, the lavish display of Turkish crystal glasses, derived from her mother’s native homeland, served to (literally) gloss over the family’s faded wealth, presenting instead a decadent, sumptuous image. As time passed, these crystal glasses began to take on a life of their own in Kanber’s evolving mind, mutating, distorting into wild tableaus, revealing layers of formidable psychological and symbolic meaning. Eventually, Kanber materialized these events into the physical world in the form of her signature glass sculptures. Assembled from discarded crystal glasses, vases, bowls, glass dildoes, hearts and flowers, transparent or colored, inherited, found in thrift stores or at flea markets, Kanber mines not only the vast quantities of glass objects at her disposal, but also the history of each salvaged vessel.

Behind the glass columns, a world parallel to ours has been caught in a state of convulsive beauty; dissected body parts, twisted tentacles, crying butterflies, and other species mutate monstrously, blossoming like flowers. Dark water drifts into silvery clouds. Eyes shine. Grey Gardens turns OUTPOST into a visceral site of endless transitions.

Proliferated by Kanber's grotesque hybrid-figures that appear to be paused in moments of temporary gestures and grimaces, the garden is constantly shifting between stages of growth and decay, seduction and repulsion, hopelessness and power - emblematic of the artist's own trans experiences. In Kanber's works, the potential of radical cuteness, plant eroticism and abysmal horror conflate in a cycle of constant metamorphosis.

The exhibition traces connections between recent developments in the artist’s sculptural practice and her performative explorations of self and other, childhood fantasies and traumas, and Turkish and diasporic cultural symbols. At once site-specific and otherworldly, Kanber's garden derives from a kind of romantic imagination with an urge to (re)arrange reality, proffering new models for a future informed by queer ecology and interspecies symbiosis. As a dandelion child of the garden, may she bloom.

Noah Kanber Umur (she/her) lives and works in Copenhagen and studies at the Royal Danish Academy of Fine Arts. Her ever-evolving practice spans across mediums - from photography to ceramics and glass sculptures, performance and installation. Over the past year, her sculptures have grown in size, resulting in the monumental The Forbidden Tree (2022). Recent exhibitions include Sweet to Tongue – Sound to Eye, Augustiana Park, Augustenborg, Denmark; Politely Screaming, Gallery Poulsen, Copenhagen, Denmark, and Elitism Sucks, Art Hub, Copenhagen, Denmark. Grey Gardens is her first solo exhibition with OUTPOST.